Two Dollar Radio Headquarters in Columbus, Ohio, has become a vegan comfort food mecca thanks to celebrity chefs Jean-Claude van Randy and Speed Dog (with constructive criticism from Eric Obenauf). In this Two Dollar Radio Guide to Vegan Cooking: The Yellow Edition, the executive vegan chefs unearth a fount of vegan-cheffing knowledge. In addition to exquisite recipes and vegan life hacks, they—like every long-winded blogger whose recipe posts you've had to extensively scroll through—view food as a story: nary a meal is prepared without recalling an epic adventure, such as when Speed Dog summited Old Goat Mountain in Banff, armed with nothing more than a sack full of cherry Ring Pops and a wily pack burro.

We are all explorers, vegan food explorers. Join us on this culinary journey—crafting delectable recipes and solving mysteries—as we slay Vegan Hunger Demons.

This Guide to Vegan Cooking is for you if:
* You’re looking for satisfying comfort food;
* You’re interested in a vegan diet but are having trouble giving up cheese;
* You’re (vegan) fishing for accessible recipes that don’t require hard-to-find ingredients you can’t pronounce;
* You crave ADVENTURE.

Two Dollar Radio: The Food Is the Story | 12/3/2020
The indie publisher’s new vegan cookbook serves its community-building mission and delivers flavor and laughs along the way
"[Two Dollar Radio’s Guide to Vegan Cooking] is more than the recipes from café chef and owner Eric Obenauf. It’s the adventurous tale of how those recipes came to be part of the menu at Two Dollar Radio’s headquarters café. Intertwined among the vegan recipes and vegan hacks for everyday life is the rock ’n’ roll vegan cheffing tale of characters called Jean-Claude van Randy and Speed Dog. Illustrated by Eric’s cartoons, the story follows the pair on a cross-country road trip during which they encounter the likes of Tofu Daddy and Drunk Publicist as they discover and/or create their badass vegan dishes. The hilarious episodes of Two Dollar Radio’s vegan protagonists are not the stuff of your average food blog... Whether you pick up a copy of the book and cook at home or stop by Two Dollar Radio Headquarters for a visit, vegan comfort food with a great backstory is easy to come by."
—Wynne Everett, EDIBLE COLUMBUS 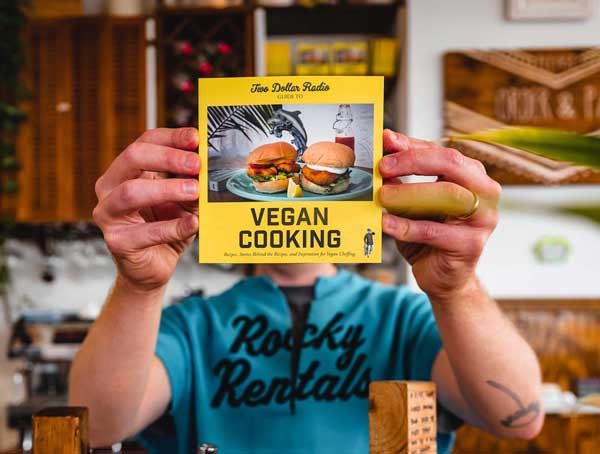 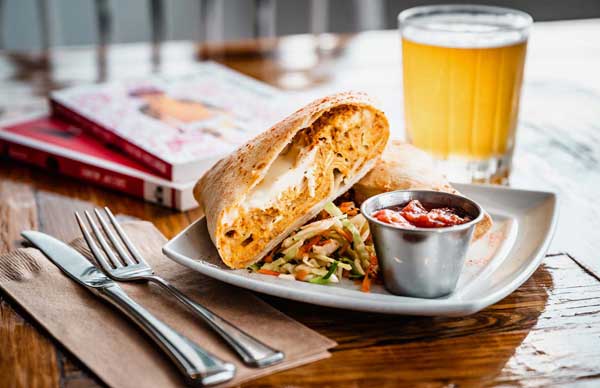 "Searching for a sauce that does it all? We’ve found it for you, friends! This vegan buffalo queso recipe from the Two Dollar Radio Guide to Vegan Cooking has a rich, velvety texture with just the right amount of kick. No one would ever guess that the basis of this quick-to-make, creamy sauce is silken tofu!"
—World of Vegan, view the Buffalo Queso recipe! 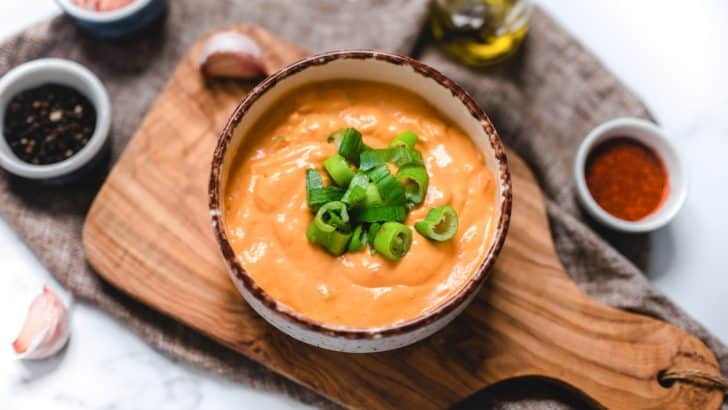 "If I had one word to describe the recipes in this cookbook, it would be decadent!"
—Sadhna Sheli, from The Masala Girl — read the full interview Bookin' | October 4, 2020
Bookin' Quail Ridge Books Podcast Episode 100 | Interview with Eric Obenauf
"Hosted by Jason Jefferies, topics of discussion include Columbus, Ohio, as a hotbed for the literary arts, how Eric came to work with Chef van Randy and Chef Speed Dog, the Two Dollar Radio tattoo club, celebrities that refer to themselves in the third person, Twizzlers, whether or not veggies are a main dish, drum solos, and much more."

MikeyPod | November 16, 2020
MikeyPod 310 | Interview with Author and Publisher Eric Obenauf
"Eric and I talk about his incredible work and his latest creation, Two Dollar Radio Guide to Vegan Cooking. Of course, we dig into process, overcoming obstacles, and the beauty that often comes from limitation."

"I love a cookbook that's as fun to read as it is to cook from! The punk aesthetic that runs through the book reminds me of 90s zine culture... The recipes are fancy but approachable, the kind of dishes that use ingredients you already have in your pantry but include something special, like an aioli."
—Bianca Phillips, Vegan Crunk 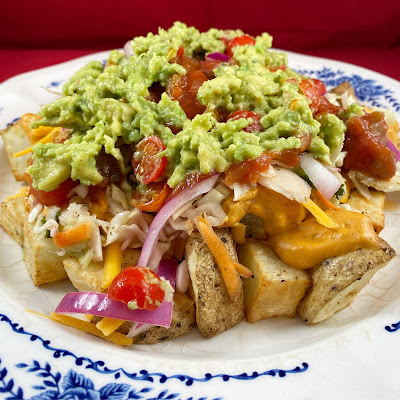 "The Two Dollar Radio Guide to Vegan Cooking is a perfectly hilarious way to learn some badass recipes. In the first of a new *very well-priced* guidebook series from the publisher, celebrity chefs Jean Claude Van Randy and Speed Dog venture out to solve mysteries and "slay the hunger demons."
—Gary Lovely, BuzzFeed News Eric Obenauf, creator of the Two Dollar Radio Guide to Vegan Cooking series, is the Editorial Director of acclaimed indie press Two Dollar Radio, which he founded with his wife, Eliza, in 2005. Eric was included in Publishers Weekly’s “50 Under 40” list, spotlighting 50 individuals working in publishing under age 40 worth watching, and was one of five finalists in the magazine’s 2016 “Star Watch” awards. At Two Dollar Radio Headquarters — an indie bookstore, vegan cafe, bar, and performance space opened in 2017 in Columbus, Ohio — Eric stocks the books and chefs it up in the kitchen. He enjoys camping, hiking, cooking, reading outside with a beer or two like a gentleman, and dad jokes.